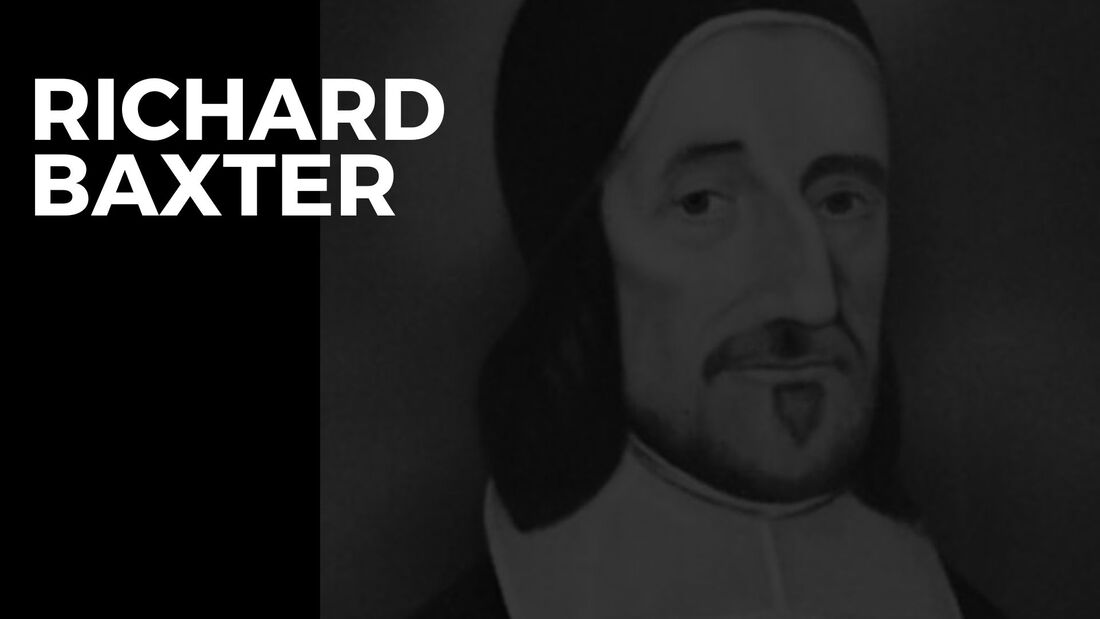 I have described Richard Baxter as a 17th century Renaissance man. More accurately, he was an English puritan pastor and writer. But that description doesn’t do him justice. According to Baxter scholars, J.I. Packer and Timothy Beougher,

“Baxter has been called the greatest of all English preachers, the virtual creator of popular Christian literature, and the most successful preacher and winner of souls and nurturer of won souls that England has ever had.”

They go on to point out that,

“As Puritanism’s leading writer on practical, devotional, moral, and apologetic themes, Baxter produced over 140 books marking out various aspects of the path of truth and holiness.”

I call Baxter a Renaissance man because of the wide interests about which he wrote. “Baxter penned treatises on grace and salvation, apologetics, …antinomianism, the sacraments, millenarianism, ethics, nonconformity, devotion, conversion, politics, and history, not to mention systematic theology.” In fact, Ian Murray points out that,

”Baxter was a many-faceted man. He was both an evangelist and scholar; a speaker and an author, a poet and a possessor of a keen analytical mind.”

How important was Baxter in his day? John Wilkins, Bishop of Chester concluded, “If [Baxter] had lived in the primitive time he would have been one of the fathers of the church.” A biographer of Baxter says about him, “he came nearer the apostolical writings than any man in the age.” How important is he for today? Packer and Beougher tell us,

“As two students of Baxter who cannot be sufficiently thankful for the impact [Baxter] has made in our lives, we would say to every believer, get to know Baxter, and stay with Baxter. He will always do you good.”

Why would I choose Richard Baxter as my “patron saint?” Because he captured as well as anyone I've read, the worldview focus (or the “every sphere, kingdom-mindedness”) of Christian discipleship. He understood that all of life (every sphere) must be faithfully integrated because Christ is the Lord of all of life. Packer writes,

“The sheer brilliance of Baxter’s achievement in crystallizing a proper form for the life of faith on a canvass as broad as life at a very high level of intelligent, Bible-based, theologically-integrated wisdom, and with unfailing compressed clarity, is dazzling to the mind. Baxter had a high view of “the unity of human life before the Lord.”

Packer says there is no world-denial with Baxter. Instead, what Baxter calls for “is the sanctification of all life through bringing all its manifold activities into the unity of a single overmastering purpose – loving God, and laying hold of eternal life in its fullness. That can be put the other way round, by saying that what Baxter calls for is a branching out of the converted Christian’s heart’s desire, to know and love and please God, into biblically informed and situationally appropriate action in every department of life.”

Richard Baxter has shaped my faith and ministry and many ways. I give thanks to God for his faithful witness. The links on this page will take you to resources by or about Baxter. Read Baxter, he really will do you good.

I recently found this answer to a question I was asked when I went through the ordination process. It's not my best writing by any means, but the heart of what I was trying to communicate still rings true for me.

Question: Who has been a leadership role model for you (outside of Biblical characters) and what have you learned from him/her?

Answer: The leadership role model who has done the most to shape my ministry is Richard Baxter. Richard Baxter was a pastor in the 1600’s who served a local church in Kidderminster, England. He was much admired as a pastor by the Wesleys.

“John Wesley’s father Samuel, once a nonconformist wrote: ‘I wish I had [The Reformed Pastor] again: Directions to the clergy for the management of their people which I lost when my house was last burnt… [Baxter] had a strange pathos and fire.’”

“John [Wesley] himself told the Methodist Conference: ‘Every travelling preacher must instruct them from house to house… Can we find a better method of doing this than Mr. Baxter’s? If not, let us adopt it without delay. His whole tract entitled The Reformed Pastor, is well worth a capable perusal.’ On another occasion he challenged his preachers: ‘Who visits the people on Mr. Baxter’s method?’”

“Charles Wesley and William Grimshaw of Haworth conversing together agreed that preachers should ‘visit from house to house, after Mr. Baxter’s manner.’”[1]

Baxter was a living example of all that he wrote in his book, The Reformed Pastor. By “reformed,” Baxter meant “revived.” His book was originally written to clergy in his area and appealed to them to rediscover their calling as shepherds of souls – to really care for their flocks as Christ loved the church. The book is moving and was used of God to pour conviction on my soul as a pastor. However, mere words can often fall flat. There must be a life behind those words that matches them. His was such a life.

Baxter was known throughout England as a godly man. He sought to live a life that was above reproach and one that could never be attacked as hypocritical. Like Wesley, he lived a very modest life because it was more important for him to give his money to the poor as well as to purchase books and Bibles for them.

He truly loved his flock at Kidderminster. He developed the practice of visiting every family in his church at least once a year at their home (over 2,000 people). There he would pray with them, make sure they knew the life-transforming truths of the faith, and see about any areas of their lives in which they needed help. He did not then leave them, go home, and forget about them. They were continually on his heart.

His preaching and teaching concentrated on the essentials of Christian doctrine and holy living. He did not have time for those who focused only on divisive and nonessential matters. His view was that life was too short for such things.

His Impact on My Ministry

These are some aspects of his life and teaching that have impacted mine. Though my ministry falls short of his, humanly speaking, it is my goal. I have tried to develop a ministry that goes to the people and meets them where they are. My purpose is to create a warm and friendly environment where they can share the hopes, joys, fears and struggles of their souls with me. In my teaching I attempt to concentrate on those things that matter most, those things of eternal significance, such as knowing God and his Word, living holy lives, bearing witness to Christ in the world and displaying mercy and justice. Baxter has helped me expand my view of ministry.

How does this relate to leadership? Well, Baxter modeled what he taught. God has been unfolding before me the idea that our lives must be lived with profound consistency. If I say something from the pulpit, in a Bible study or a committee meeting or, in a one-on-one counseling experience, and live in a way that is radically inconsistent with what I’ve said, then I have demonstrated poor leadership indeed. Why? Because my words will soon begin to fall on deaf ears and rightly so. Leadership must be daily lived and modeled before those one is leading, and that is one of the most important things that I learned from Richard Baxter.

[1] From J.I. Packer’s Introduction to The Reformed Pastor by Richard Baxter. Page 15.